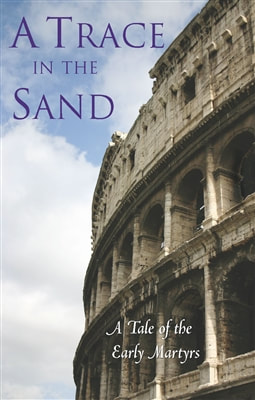 It is A.D. 274. Emperor Lucius Domitus Aurelianus rules the Roman Empire with the belief that no one is mightier than he and his gods. Kings tremble before him, and his subjects worship him as a new Jupiter, who holds the lives of men and nations in his hand. The “Roman Peace” means prosperity, security and happiness to the noble families of Rome. And all should be content in their lives of luxury and ease. But not everyone is …

Alexamenos, the teenage son of the powerful Senator Poplius, wants to know what the purpose of his perfect life is. Handsome and rich, haughty and cruel, Alexamenos fears nothing and respects no one—until the day his life is saved by the slave boy Milvius. Finally, Alexamenos has met someone who possesses something that he cannot attain: an otherworldly peace.

Soon the slave’s secret to happiness is revealed with a simple trace in the sand: Milvius is a Christian. The power of his Christian Faith wakens the Senator’s household to the call of God, but little do they know that the eyes of the Imperial Palace are on them. Before long the former pagans are facing danger, persecution, and even martyrdom.

A Trace in the Sand is a novel for young people originally published in the Greek language. It is a collaborative work by Orthodox Christians in Greece, where it has gone through seven editions. St. Herman Press is pleased to present the first English translation of this book.