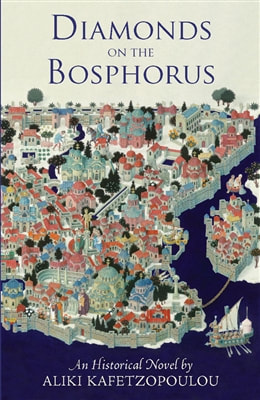 Diamonds on the Bosphorus, byAliki Kafetzopoulou

Constantinople in a.d. 400 is the greatest city of its era—the throne of the Roman Empire with streets of marble and churches adorned in gold. But not all is right in the imperial capital: the empress Eudoxia has begun a persecution of the city’s great pastor and preacher, St. John Chrysostom.

Diamonds on the Bosphorus—an historical novel for young people—is the story of the choice made by Christians throughout the centuries: to follow the path of Christ or the path of worldly glory.

Nicephorus and his twin sister, Juliana, have dwelt their entire lives in the shadow of Constantinople on the shores of the Bosphorus—the majestic waterway connecting the Sea of Marmara and the Black Sea. As the children of the pious fisherman Theodotus, they have been raised in the Christian virtues, devoting themselves to serving others. Their greatest joy is to hear the divine words of the righteous bishop St. John Chrysostom.

On the verge of becoming adults, Nicephorus and Juliana have their lives turned upside-down with the revelation of their true identities. Suddenly, the paths of these simple fishers have become irreversibly intertwined with intrigue in the imperial court and the persecutions raised against St. John.

Aliki Kafetzopoulou (1924–2005) was a teacher in Athens, Greece, who devoted much of her life to works of Christian charity through the Orthodox lay sisterhood "Hope." She is the author of The Purple Mantle and several other popular books in Greek, aimed at the formation of the soul.