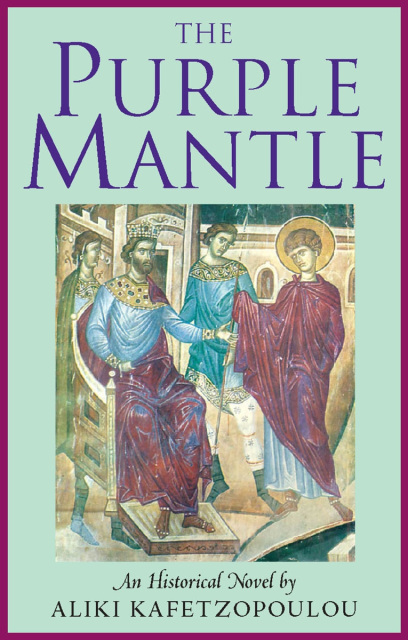 The Purple Mantle, by Aliki Kafetzopoulou

Set in the Roman Empire during the reign of the notorious persecutor of Christians, Emperor Diocletian (a.d. 303), THE PURPLE MANTLE is a moving story of faith and heroism amidst a society plagued by confusion and fear. Greek Orthodox author Aliki Kafetzopoulou (reposed on February 24, 2005) has skillfully woven a rich historical tapestry full of spiritual depth, presenting a vivid picture of the intense circumstances in which the ancient Christians lived, and a close-up, immediate view of the exploits and contests of the early martyrs, through which the Faith of Christ triumphed.

This story brings to life in vivid clarity the choices faced by people very much like ourselves—between the ephemeral comforts and grandeur of this world and the eternal joy and glory of the world to come. In a certain respect we make these choices daily even now—for example, when we choose television over spiritual reading and prayer, and when we choose the ease of material possessions and the accumulation of wealth over charity and acts of mercy. Yet, in a very literal sense, we may someday be forced to make the same choices as did many of the characters of the story, at the risk of our very lives.

“…His strength was leaving him. His life was ebbing away. This fresh flower was closing its petals before it had even had a chance to open them all the way; but it was closing them now in order to be able to open them again, refreshed, unfading and eternal, in the garden of everlasting heavenly joy….

“Then he leaned his head on the coals of fire and let his last look fall on Helianos. And his gaze stayed fixed there, until the fire went out in ashes and smoke….

“With his eyes full of tears, Helianos stared with shock. He held the young martyr’s last look inside himself with a sacred passion, indelible in the depths of his memory and heart. He felt like running toward him, putting his arms into the fire to hug and kiss him, and asking him secretly: ‘Tell me … tell me … what secrets does this faith of yours hold that you love it so much? Tell me, so I can love it too!’”

—excerpt from THE PURPLE MANTLE

Although written especially for young adults, this historical novel has enthralled people of all ages with its riveting narrative. Carefully tracing the spiritual awakening and growth of a young man and woman, it places in striking relief the essence of all Christian life.

This book is now in it's new, second edition, and includes a brief biography of the author.